All Collections
AP History Tips
What was the Cold War?

What was the Cold War?

APUSH: Here's a quick review of important events, people, and other things to know about the Cold War

Written by Briana Dokken [intern]
Updated over a week ago

Don't freeze up on the APUSH exam! 🥶❄️ Learn everything you need to know with weekly live stream reviews and content when you join Fiveable+.

After WWII, the United States and USSR had vastly different goals and ideals, leading to a conflict over which country would become the dominant world superpower.

The term "Cold War" stems from political tension and hostility that falls short of open warfare.

While the US was focused on spreading democracy and open markets around the world, the USSR wanted to spread communism in order to have allies around them. This led the US to take a "containment" approach, as promoted by scholar George Kennan. Kennan believed that the US needed to focus on containing communism, which was the dominating thought that guided American policy during this time.

1947: America gives aid to Britain to help fight communist forces in Greece, leading to the Truman Doctrine, which declares America will give aid to any country fighting against oppressive communist forces.

1947: The Marshall Plan is put into effect, in which America gives money to Europe to rebuild. This had a goal of creating more American allies and stopping the spread of communism in Europe.

1949: NATO (North Atlantic Treaty Organization) is created by the US and other non-communist countries, creating an alliance of nations that would coordinate their defense against communist countries if any one of the countries were attacked.

1949: USSR explodes its first atomic bomb, showing military strength over the US and launching the arms race.

1950s: The Red Scare started when Senator Joseph McCarthy claimed to know of prominent Americans who were secretly communists. The culture of fear in America strengthened as politicians and other public figures were accused of being communists. This turned into a "witch hunt" (referring to the Salem Witch Trials) as individuals were wrongfully branded with the communist label by others who wanted to destroy their careers.

1952: Tension heightens in the arms race as the US drops its first hydrogen bomb.

1954: "McCarthyism" (the communist accusations and fear) began to die down in the US, and the senate censured Senator McCarthy as they recognized his actions as being an untruthful "witch hunt."

1955: Warsaw Pact created a communist alliance between the USSR and other European communist nations.

1957: The Cold War continues as the USSR puts Sputnik 1 -the first orbiting satellite- into space, launching the space race.

1961: The USSR sends the first human into space.

1961: As the USSR continues to advance into space, President Kennedy challenges the US to get a man on the moon. As tensions continue, and the US falls behind in the space race, America puts more funding into science and math programs in order to reach the moon first.

1961: After communist leader Fidel Castro took control in Cuba, the CIA executed the Bay of Pigs Invasion. The plan to invade Cuba and overthrow Castro failed and tensions about communism continued to grow.

1961: The Berlin Wall is constructed, separating the USSR and US-controlled areas of Germany, reflecting the growing hostility between the two nations.

1962: The Cuban Missile Crisis begins when Castro allows the USSR to secretly set up missiles in Cuba aimed for the US. Later that year, the US discovered them, and President Kennedy put a blockade around Cuba while ordering the USSR to disarm the area. Just as war seemed inevitable, the Soviet leader Nikita Khruschev took the missiles out of Cuba.

1969: The American Apollo 11 lands and America becomes the first country to send people to the moon.

1978: The USSR invades Afghanistan, and the US supports Afghani rebels.

1989: The Cold War begins to simmer down as the USSR withdraws from Afghanistan, militarily and financially exhausted. USSR Premier Gorbachev recognizes that continuing the pace of rapid military growth the Cold War promoted was economically unfeasible, and American President Reagan advocates for taking down the Berlin Wall.

1989-90: Riots occur in East Germany while other parts of Europe rebel against Soviet power. The Berlin Wall finally falls in 1990.

1991: The USSR dissolves into the separate countries of Russia, Ukraine, and Belarus.

🌟Remember, this is just a quick snapshot of the main things you should know from the Cold War. History is all about drawing your own conclusions from complex situations, causes, and effects. In order to do that, you need to read your APUSH textbook! The best advice I can give you is to read, re-read, review, and draw conclusions for yourself from the material you read. While this is a great quick review, when studying history, it is important and much more interesting to dive deeper, and I really encourage you to do so! Good luck this year, happy reading, and remember. . . 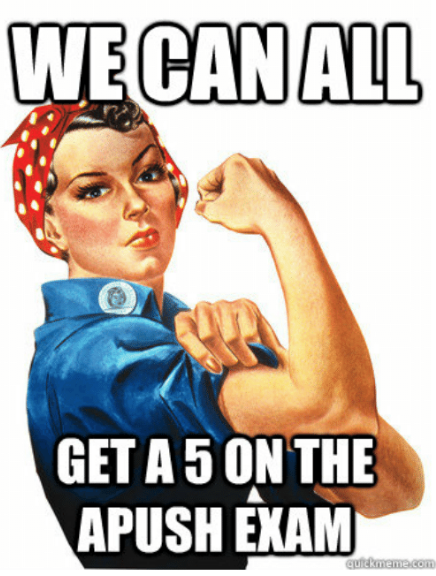