All Collections
AP Physics 1 Tips!
How do I choose which kinematic equations to use?

How do I choose which kinematic equations to use?

There are multiple variables and equations involved. How do you pick the right ones to quickly and efficiently solve problems?

Written by Qilin Xue
Updated over a week ago

👉 Check out these AP Physics resources:

When an object moves from A to point B under a constant acceleration, there are five quantities that describe the motion:

Fun Fact: you only need to know just three of these quantities in order to determine the other two! College Board gives the following equations on the equation sheet: 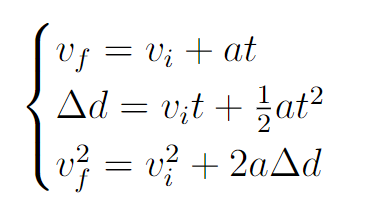 Note that College Board drops the subscript for final position and velocity but feel free to leave them on to avoid misunderstandings.

You should also know the following definition of average velocity. Occasionally you will need this:

Steps To Solve A Problem

Romeo throws a bouquet of flowers up a building. What is the minimum speed he needs to throw the flowers such that it lands in Juliet's balcony, which is at a height of 5 meters above him.

First, we will determine as many known variables as possible. At first, this may seem troubling as there is only one number in the question! We only know that the vertical displacement Δd is 5 meters.

However, because the object travels through the air it experiences a constant acceleration of -9.8 m/s².

Finally, we will use the last piece of information we haven't used yet: we wish to find the minimum speed. In other words, Romeo needs to throw the flowers up in such a way where it reaches the balcony but just barely. This occurs when the balcony is at the top of the trajectory or when the velocity is zero.

Here we found our three quantities: 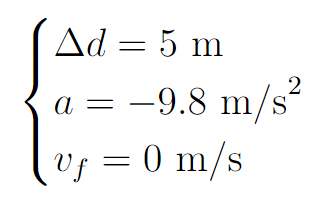 The quantity we wish to find is initial velocity. The only equation that includes only these four variables is equation 3: 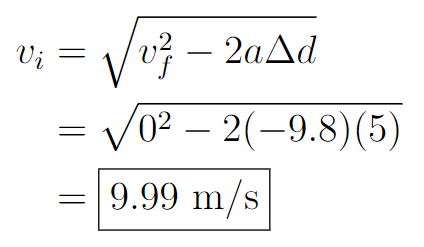 Remarks: Notice that the equation we chose did not depend on time. Whenever you don't get the value of the time elapsed, this equation is almost always the right way to go.