All Collections
AP Physics 1 Tips!
How do I derive the kinematic equations?

How do I derive the kinematic equations?

Some of the equations look nasty. Though it is not necessary to learn how to derive them, going through the process can build intuition.

Written by Qilin Xue
Updated over a week ago

👉 Check out these AP Physics resources:

A traditional physics course would formally derive the kinematic equations with calculus. However, there is a far more intuitive and beautiful way of looking at them with just plain algebra.

First, we will plot velocity vs time on a graph. 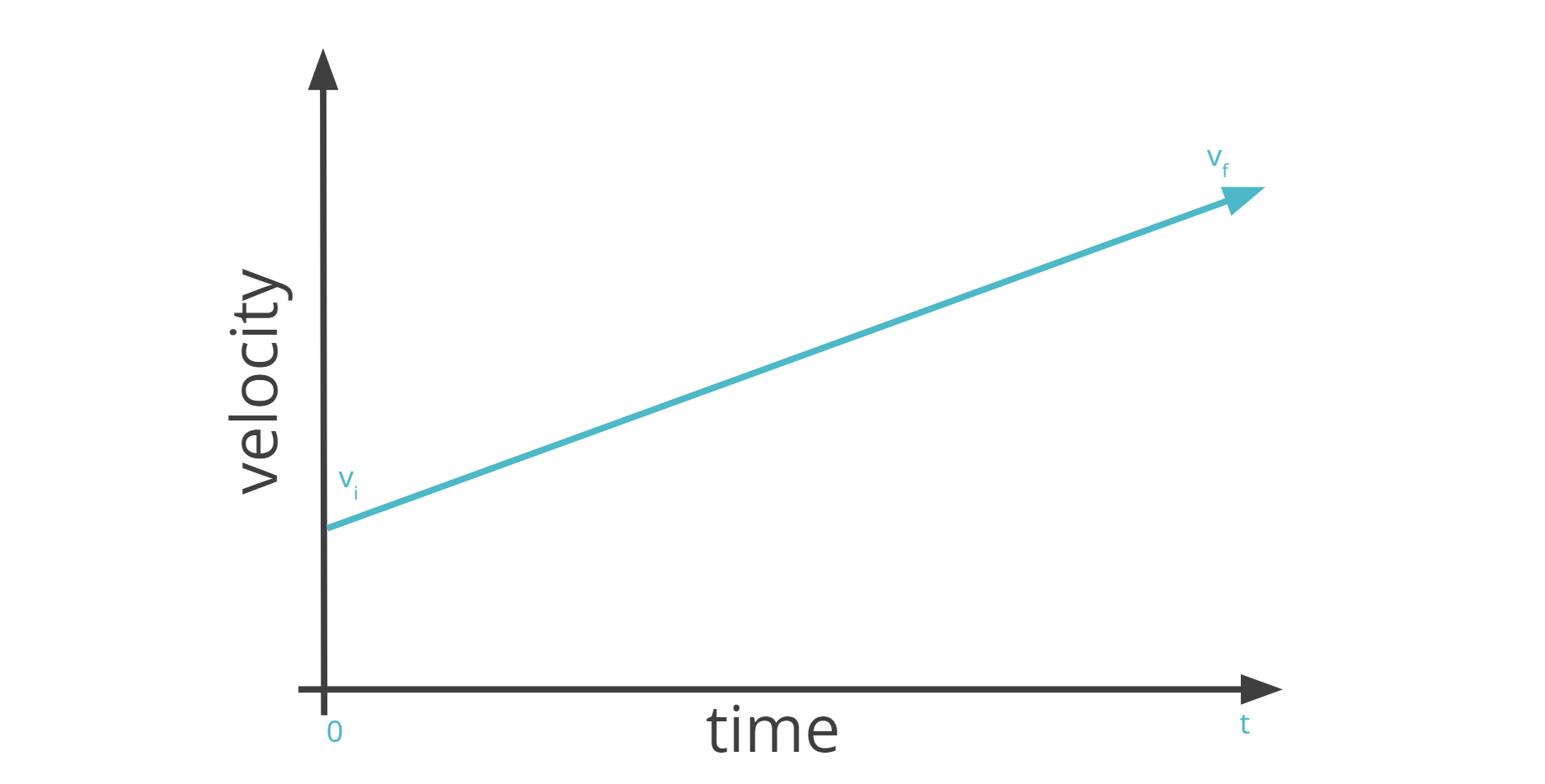 This graph represents an object that starts with an initial velocity and steadily increases it as time grows.

The slope of the graph is Δv/Δt which is the definition of acceleration. The y-intercept is the velocity of the object at t=0 or the initial velocity vᵢ. Using y=mx+b, the general form of the line is:

The x-axis is time and the y-axis is velocity so substituting those variables give:

Remarks: this could have also been derived using the definition of acceleration
a = (v-vᵢ)/t and then rearranging to solve for v. However I chose this slightly different way to create the basis for the next section.

Before we move on to this derivation, we will first show that the area under the velocity vs time graph is the displacement. If you are already familiar, you may skip the next subsection.

Area of v-t graph is displacement

If you jog at 2 m/s for 4 seconds, it is not hard to see that your displacement will be 8 meters. Graphically, this is represented by the area traveled: vt=Δd.

Now suppose there is a sudden jump in your journey. You jog at 2 m/s for the first 2 seconds but for the last 2 seconds you suddenly sprint at a speed of 4 m/s.  We can determine the displacement by breaking the journey up into two sections, finding the displacement for each, and adding both up. This is equivalent to finding the area under the graph.

Now suppose you change speeds 100 times during the journey each time slightly faster than before. We can find the area of the graph by breaking it up into 100 small rectangles or we can approximate it as a triangle. The more times you change speeds, the more accurate it will be. Under a constant acceleration, you will be constantly changing speeds and therefore the "approximation" will be exact. If you find the area under the graph, you can find the displacement.

Remarks: Someone who has learned calculus before would have recognized this as a Riemann Sum. If you don't know calculus, I just tricked you into reading a brief introduction to it. But don't worry, this is the hardest part to understand.

Finding the area of the v-t graph

Refer to the velocity-time graph earlier. What is the area?

We can break the "trapezoid" into two parts: the rectangle at the bottom and the triangle at the top.

The area of the rectangle is given by vᵢt

Adding the two areas together gives A =  vᵢt + 1/2 at^2 which gives the equation for displacement!

Fortunately (or unfortunately), this equation is derived in the same way as the last equation just with a bit of algebraic manipulation. We again find the area of the velocity-time graph, but we change our variables around a bit. 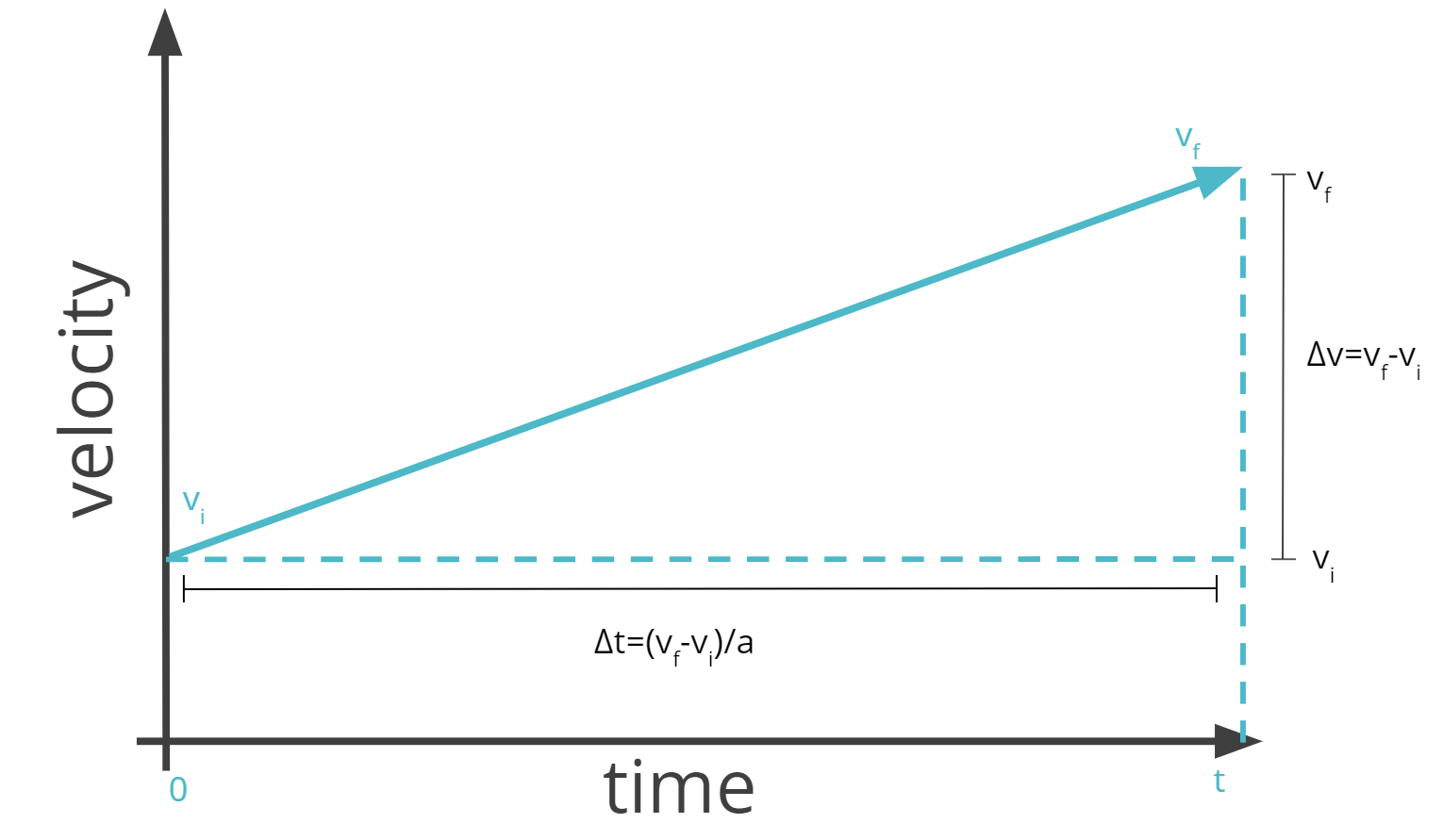 The height of the triangle is now the final velocity minus the initial velocity. The base is now Δt = (v - vᵢ)/a. This last part comes from the definition of acceleration: a = (v-vᵢ)/Δt and rearranging to solve for Δt.

Now, summing up the area of the triangle gives:

The area of the rectangle is:

Altogether the area (displacement) can be expressed by and via some algabraic manipulation:

This last derivation doesn't have any nice intuitive way of looking at it. Someone with a keen eye may ask: velocity is a vector, so is velocity squared still a vector? Is it even legal to multiply two vectors together like this?

The answer is yes, and it is called a dot product. This will not be the focus of this article but a dot product takes two vectors as an input and outputs a scalar.

Perhaps this could lead to a second method of deriving this equation. Think and ponder!