All Collections
AP History Tips
Why was Henry Clay the "Great Compromiser"?

Why was Henry Clay the "Great Compromiser"?

Written by Rebecca Zhu [Intern]
Updated over a week ago

🇺🇸 There's no need to compromise when it comes to getting the best resources for APUSH. Join free weekly live stream reviews here when you become a member of Fiveable+! 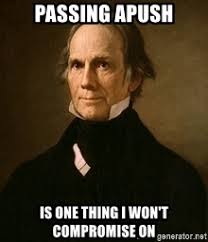 Henry Clay was considered the "Great Compromiser" due to his three major compromise proposals.

1. Missouri Compromise/Compromise of 1820: Established slavery status rules for the Louisiana Territory. No slavery was allowed above the 36'30 parallel except for Missouri.

3. Compromise of 1850: Set slavery status for states/territory acquired from the Treaty of Guadeloupe-Hidalgo following the Mexican-American War. Banned the slave trade in DC and established a harsher fugitive slave law.